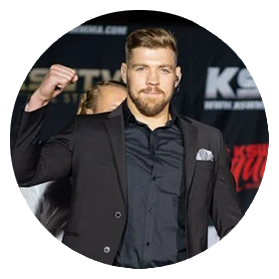 Dricus Du Plessis, born January 1994 in Hatfield, is a South African middleweight mixed martial arts (MMA) fighter and kickboxer. Du Plessis is a former welterweight champion of the EFC and International KSW, the latter of which he has been participating in since 2017.

He began practicing judo and wrestling at the age of 5 and had advanced to kickboxing when he was 14 years old. In 2012, 17-year-old Dricus won the gold and the first ever medal for South Africa in the WAKO World Championships for juniors and cadets in the up to 86kg category in the K-1 formula.

He  also participated in 3 amateur fights before becoming a professional fighter in 2013.

Congratulations to our Champion

Congratulations to the EFC’s middleweight reigning champion and our brand ambassador Dricus Du Plessis on winning the match against Brendan Lesar at the EFC 83 event.

“I’m really excited about this specific victory, and I am honored to have the opportunity to be in the same ring as Lesar, who is an amazing MMA fighter. I would also like to thank CM Trading for their support throughout the past few months.”, said Du Plessis.

In June 2013, Dricus joined the national MMA organization, the EFC, worldwide, and made his debut  against Tshikangu Makuebo, whom he defeated with a technical knockdown in the first round. Over the next 6 years, Dricus has managed to become a fearless MMA fighter and the champion of the EFC. We are excited and proud to collaborate with such an incredible fighter, and we expect great things from this budding relationship.

“I’m excited to be partnering with Africa’s largest online broker, CM Trading, and helping them to increase awareness of the brand and online trading through the sport of MMA.

As a professional athlete it’s vital that I use my earnings wisely, and being able to learn the art of trading with CM Trading will definitely assist me in setting up additional revenue streams to ensure I am financially sound when I decide to hang up the gloves one day.